Cosplay attendee in his costume as Nurse Joker.

Harvey Dent wakes up in the hospital after half his face is burned clean off as he’s being “helped” by Nurse Joker. Dent wakes up, sees the nurse and doesn’t react until the Joker takes his mouth mask off. Dent’s delayed reaction makes it seem that the Joker is unidentifiable ― despite the very visible white and black face makeup ― until his mask is removed.

The Joker is a fictional supervillain from DC comics. The Joker embodies themes of chaos, anarchy and obsession.

The Joker (The Dark Knight) is a fictional supervillain from publisher DC Comics and the main antagonist in Christopher Nolan's 2008 superhero film The Dark Knight. He was portrayed by late Australian actor Heath Ledger. Ledger's interpretation of the character is specifically influenced by the graphic novels Batman: The Killing Joke and Arkham Asylum: A Serious House on Serious Earth. In the film, he wears the character's traditional color palette, while his facial appearance includes clown makeup that covers facial scars of a Glasgow smile.
Cosplay, a contraction of the words costume play, is a performance art in which participants called cosplayers wear costumes and fashion accessories to represent a specific character.

Cosplayers often interact to create a subculture and a broader use of the term "cosplay" applies to any costumed role-playing in venues apart from the stage. Any entity that lends itself to dramatic interpretation may be taken up as a subject and it is not unusual to see genders. 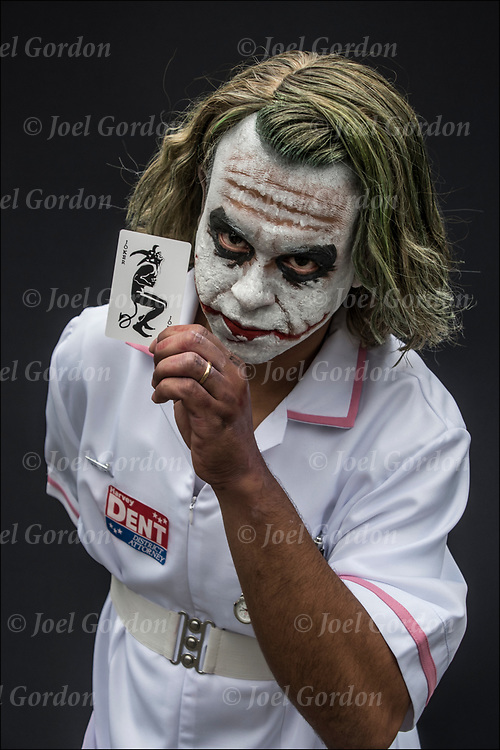